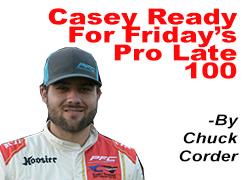 Roderick rocking and rolling with new team, eyes return to glory at 5 Flags

A hard day’s work hauling chicken litter up, down and across country roads takes its toll on a man.
Casey Roderick is no exception. He falls into the couch after hours of transporting supplies for chicken coops to Mississippi farms.
This was the gameplan for the 29-year-old Late Model champion as recent as late February. Roderick—working with friends in Pulaski, Miss.—bought a belt trailer for a season of hauling litter and shavings.
Then, a mere two weeks before Rattler weekend at South Alabama Speedway, Roderick received a call out of the blue from Rock Motorsports owner T.M. Porter. Roderick had never met Porter, whose team is based out of Chipley—two hours east of Five Flags Speedway.

“He asked what I had going on,” Roderick remembered. “I told him I’d be happy to drive it for him if he wanted me to.”
The unlikely PLM pairing has been electric in their short time together. Roderick has a win and three more podium finishes, including a strong second at the Baby Rattler in March.

“It’s been a while since I’ve competed in an Allen Turner Pro race at Pensacola,” Roderick reminisced. “We’re certainly going for the win, but there are a lotta good cars out there. It’s gonna be tough to pull off a ‘W’ but I’m up for the challenge.”

Roderick led Rock Motorsports to the JEGS/CRA All-Stars (PLM) Tour win at Salem, Ind., last month. Driving a SLM for Team Platinum where, Roderick swept the weekend after also driving to Victory Lane in the ARCA/CRA Super (SLM) Series race. He became the first short-track driver to win both CRA Super and PLM races on the same day.

The fact that Roderick had never competed at Salem, much less any other Indiana track, made the feat more impressive.
“I didn’t know what to expect going up there,” he said. “I had been there as a fan, but not to race. I caught on quick in practice and I was able to pull it off.”
It marked Roderick’s first Late Model win since his 2020 triumph at the All American 400. The weekend sweep injected a jolt of confidence back into Roderick’s outlook on racing.

The chickens and their shavings can wait until the rooster crows Monday morning. Until then, Roderick hopes his past success at Five Flags will lead him back to Victory Lane Friday at the famed half-mile asphalt oval.
He explained his Five Flags fortune: “I feel like as a racer, knowing what you need to feel your racecar or how to approach the weekend and the setup of the car has a lotta to do with success. Understanding how to get to that point is the key to success at Pensacola. Being smart throughout race and not putting yourself in harm’s way and making sure you have something left at the end of the race. There are a lotta factors that come into play. It’s a finesse racetrack, and that’s how I like to drive my cars.”