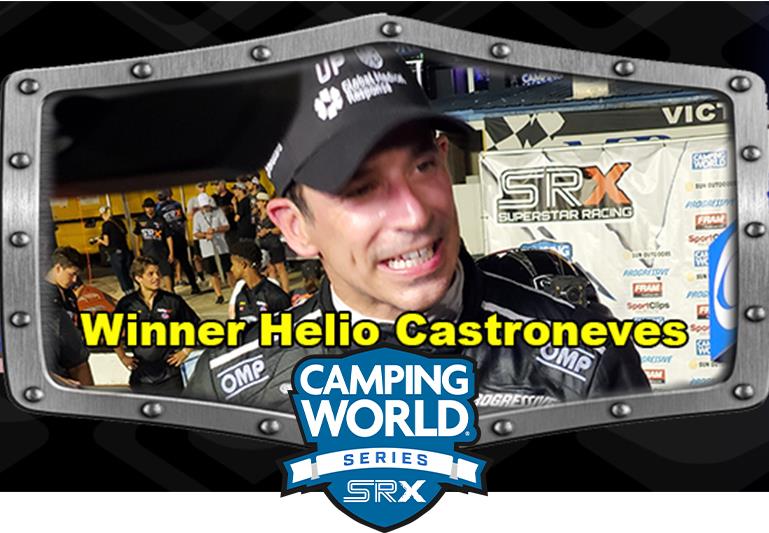 Spider-Man scaled another wall Saturday night just like he has done countless times in a decorated IndyCar career.
This time, though, four-time Indianapolis 500 champion Helio Castroneves was doing it in Pensacola. Climbing the catchfence. At Five Flags Speedway. Helio … Castroneves.

The Five Flags faithful—hot and sticky from a blistering Saturday afternoon—showered him with roars of approval. Castroneves pumped his fists skyward, which elicited more cheers from a thoroughly entertained and jam-packed crowd. To describe the scene as surreal would be to undersell the moment. It was exactly the chill-bumps picture the Superstar Racing Experience (SRX Series) envisioned when the star-studded series targeted short-track racing’s most iconic venues.

Castroneves, a late addition Friday night to make it a 13-car field, took control of the race from his IndyCar buddy Tony Kanaan on Lap 62 of the SRX 75 season opener and cruised to the checkered flag.

“This is fantastic!” a genuinely giddy Castroneves said while being interviewed by Matt Yocum, as the race was televised live on CBS. “I don’t know what happened to Tony. It was super cool running side-by-side with him. At the end of the day, we worked really hard to be in Victory Lane.”

Late Model star and Five Flags favorite Bubba Pollard finished runner-up and 2008 Daytona 500 champion Ryan Newman rounded out the podium. Pollard more than held his own with the NASCAR, IndyCar and other motorsports champions. He won the night’s opening heat race and battled back to second after a flat tire cost him valuable track position early in the 75 lapper while running in the top-five. Pollard pitted and restarted tail end.

“I hate that I had a flat tire, but these (SRX) guys were good,” Pollard said. “It brought me back to my early Super Late Model days where you’re hanging on and doing all you gotta do.

“Hopefully, we made the short-track community proud. And to do it at Five Flags makes it so special. This is the place that taught me how to win at other places. Five Flags taught me patience and respect to my fellow racers.”
Pollard started on the pole and led for most of the first 20 laps as he and Newman waged what was the first of many battles Saturday.

“Bubba gave me a heckuva run,” Newman said. “Thanks for all fans for coming out. It was hot for us; I can’t imagine how it was for them. I love this opportunity to race with the best.”

Kanaan took the lead from Pollard on Lap 18 and built a healthy lead until a caution stacked the field back up and allowed Castroneves to make his timely pass late in the race en route to the win.