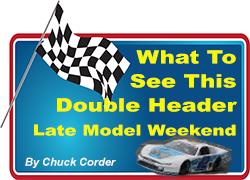 The short-track racing season has reached the stretch run.
It’s the most wonderful time of the year at Five Flags Speedway. Local drivers and the nation’s top Late Model drivers jockey for position as September’s championship races and the 55th annual Snowball Derby in December both loom on the horizon.
Five Flags has enjoyed an historic year of multiple firsts and that continues this weekend. The Late Model Doubleheader, which begins Friday night, marks the first time both Super and Pro Late Model cars will race on the same weekend at Pensacola’s high banks during the regular season.

These two are the appetizer and main course regularly in December. The Allen Turner PLM Snowflake 100 competes each Saturday and the SLMs battle for immortality on that first Sunday during Derby weekend.
[
“This weekend follows suit with our 2022 schedule in experimenting with different types of (events),” Five Flags General Manager Tim Bryant said. “We’re living in a changing world, and we recognize that doing the same things year in and year out will yield the same results at best. We want to try different things to make it a more interesting and better experience.”

The second Allen Turner PLM 100 race of the season gets the doubleheader weekend started with 20-plus cars taking the green flag Friday along with the always competitive Faith Chapel Outlaws (30 laps) and Lloyd’s Glass Pure Stocks (25). A handful of Outlaws drivers hope to reel in leaders Timothy Watson and Logan Boyett, who have combined to win all five features this season with Watson’s three putting him atop the points standings.
On Saturday, more than 20 Deep South Cranes Blizzard Series SLMs battle in 10-lap heat races and a unique 75-lap shootout. The Modifieds of Mayhem (50) join the Saturday festivities, as well, returning for their second and final time before their championship race on Derby weekend.
Gates open at 5 p.m. both Friday and Saturday with admission being $20 each night or $30 for both in advance. Children ages 11-and-under get in free all weekend.

“Both the Pro and Super guys have their sights set on the first week in December,” Bryant said. “But the competition in all our divisions—from Pure Stocks to the Late Models—has gotten so tight that it’s the best racing we’ve seen at Five Flags in years.”
There will be no qualifying for the Supers. Instead, the drivers will blindly draw their heat race starting positions. Where they finish in heat races determines their positions in the 75-lap feature.

“A short-distance race equates to these drivers going flat out, full speed for 75 laps,” Bryant said. “There will be no riding around in this one.”

There is never any riding around for Bryant, who has put maximum effort for years in building Five Flags into a home for elite short-track racing and family entertainment for all Pensacola. Among its many community and charitable endeavors, Five Flags will host the American Cancer Society’s local Relay for Life event Sept. 17.

A national audience got to see why the famed half-mile asphalt oval is so special last month. The SRX Racing Series brought a star-studded roster of drivers, a bevy of CBS-TV production trucks and crew, scorching weather and an average audience size of 951,000 for its season opener in June, according to Nielsen.

“It solidified what we’ve always felt, which is Five Flags Speedway has the most loyal race fans in motorsports,” Bryant said. “To brave the brutal heat to watch the race and get autographs, it’s a testament to the fans we have here.
“The folks from CBS were just great people to work with. The broadcast put nearly a million sets of eyes on Pensacola and our racetrack. I don’t know if you could put a price on that value.”

Bryant said the SRX race created an immediate buzz around Snowball Derby ticket inquiries.
Drivers have their own set of Derby inquiries heading into this week: “What’s the grip like coming out of Turn No. 2? How can I set myself up for success when exiting Turn No. 4? How do I handle the middle of the turns?”
Certainly, the track will feel much different with cooler temperatures in December, but there’s still much to gain as the stretch run kicks into high gear this weekend.