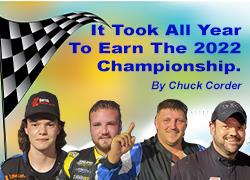 Night of Champions for local classes Saturday at Five Flags Speedway produced little drama.
Points leaders for the four divisions handily maintained their respective advantages and clinched track titles.
Instead of suspense, Saturday night showcased dominant seasons for our four track champions. Among that group is 18-year-old Timothy Watson, who sounds like a choir boy but drives like a stone-cold killer. Watson locked up the Faith Chapel Outlaws track championship in qualifying first (17.480 seconds) Saturday.
Never one to rest on his laurels, Watson punctuated his title run with another Faith Chapel Outlaws 35-lap feature win. It was his fifth victory of the season in eight races.
“We put a lotta time to try and make everything perfect for each race we go to,” Watson said.
“This is about all I do. I work all day and come home and work on these things.”
Watson took the lead on Lap 4 of a caution-plagued feature and was picture perfect on each restart to cruise to Victory Lane. Watson showed his dominance by lapping all but nine of the 21-car field. Conner Sutton finished second and Bubba Winslow rounded out the podium.
“It’s tough and there’s great competition,” said Winslow, a former Outlaws track champion (2020). “Watson is a heckuva shoe. He is a talented young guy and a great guy off the track.”

The future is bright white for Seth Christensen.
At just 14, he is already an integral part of Curt Britt’s booming short-track racing program, wheeling a Pro Truck. The Pendergrass, Ga., teen sensation has the voice of fellow hotshoe Grant Thompson—only 16 himself, by the way—helping Seth navigate the abrasive asphalt of Five Flags Speedway and other tracks. And, in May, he accomplished something Five Flags drivers spend their entire careers striving for: Winning a feature race.
Make that two after Seth’s performance in the Zoom Equipment Pro Trucks season finale 30-lap feature. He showed some moxie in sliding by then-leader, and eventual series track champion, Logan Boyett on Lap 22 en route to another Victory Lane trip.

“I love this track,” Seth said. “A huge thanks goes to everybody that has helped me with this truck. It’s awesome. I was lucky to follow Logan for most of the race. I just kept catching him lap-by-lap. I got to him between (Turn Nos.) 1 and 2. I couldn’t get by him all the way, so I had to rough him jut up a little bit. But I think that’s just part of racing.”

Boyett disagreed and took exception with Seth’s pass but chose to focus on securing his second career Zoom Equipment Pro Trucks track championship. He finished runner-up with Caleb Sanford coming home third.
“It feels great to be racing with this team,” Boyett said, “and all these sponsors who give me the resources I need to compete at the highest level.”

Jonathan Langham returned to Five Flags Speedway—after a trip to race at iconic North Wilkesboro (N.C.) Speedway—a man on a mission.
While younger brother Maddox Langham continues to make progress in his various programs, Jonathan’s season has been relatively quiet. But, not at the Night of Champions race Saturday at Five Flags.

Jonathan Langham set a new track record (19.653 seconds) in qualifying and then scored the season-finale victory in The Dock on Pensacola Beach Sportsmen 30-lap feature. Langham also pocketed a cool $1,000 for the win, as Saturday night’s race was a makeup for last month’s Sportsmen Spectacular rainout.

“We’ll use the money to get us outta the hole for going to North Wilkesboro last week,” a thrilled Langham joked. “God Almighty, that was a blast. I tried to ride as much as I could, but that was probably the most fun, most competitive, cleanest racing I’ve done in years.

“I hope the fans enjoyed the show as much as I did behind the wheel.”
B.J. Leytham was second and Kevin Mitchell rounded out the podium with yet another strong finish in the dirt-track driver’s rookie season on asphalt.
Brannon Fowler didn’t have his best night, finishing fifth, but still had plenty enough cushion to capture his fourth career The Dock on Pensacola Beach Sportsmen track championship.
“This class has youth, experience and everything in between,” Fowler said. “Any car is capable of sitting on the pole and winning a race. I feel fortunate that we’ve been so successful to win another championship.”

Robert Loper has enjoyed dominant season in defending his Lloyd’s Glass Pure Stocks championship from 2021. He had six feature wins in seven starts coming into the Night of Champions at Five Flags Speedway.
So, when he took the lead once again Saturday night, it seemed a mere formality that Loper would once again find Victory Lane. But Colby McDonald had other ideas. The Semmes, Ala., driver stalked Loper, who led most of the Lloyd’s Glass Pure Stocks 25-lap feature Saturday.

McDonald finally got around Loper two laps from the finish and scored the season finale victory of Night of Champions. He also collected an extra $200 and the bounty that was on Loper, who had won three consecutive features coming into Saturday for the second time this season.

“Robert is not going to make a mistake,” an ecstatic McDonald said. “But the good Lord gave me a chance. (Loper) pushed me all year to be faster and faster, and tonight it paid off.”

Lope won six times in eight features this year, only losing each time a bounty was placed on him. Cameron Leytham defeated him in May. Despite the loss, Loper—who finished runner-up—easily won his second straight Lloyd’s Glass Pure Stocks track title. He will go into December as the favorite as he looks for a fourth career Snowball Derby championship.

“It feels awesome,” Loper said. “The goal today was to just start the race. Getting a win, that would’ve been great. Hats off to McDonald. They did their job and I got beat.”
Caleb Burkett rounded out the podium. 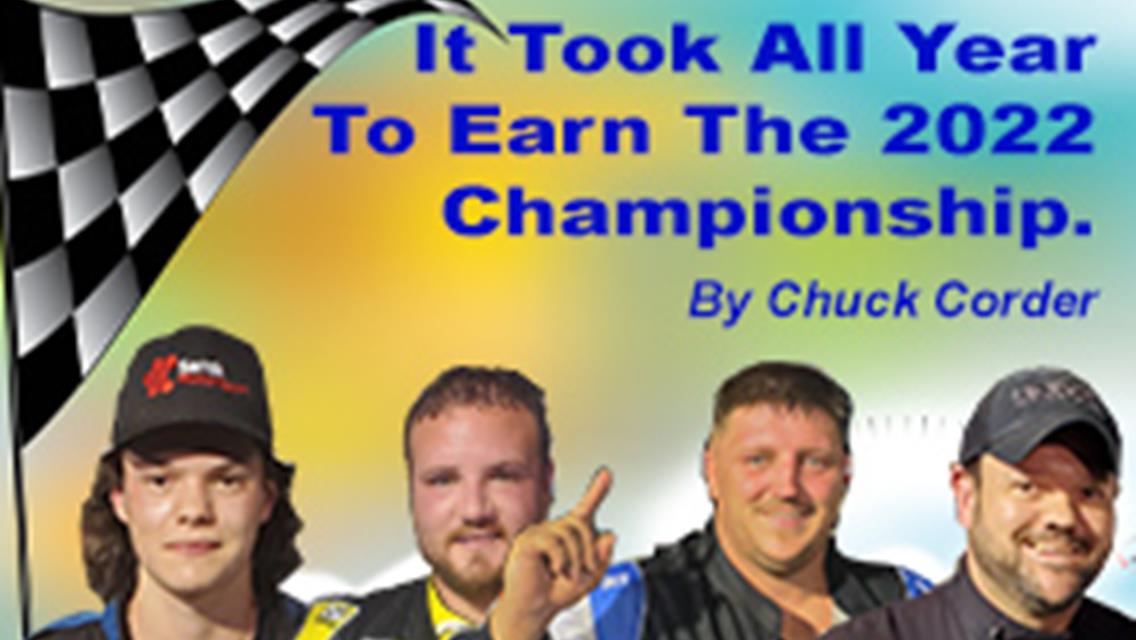 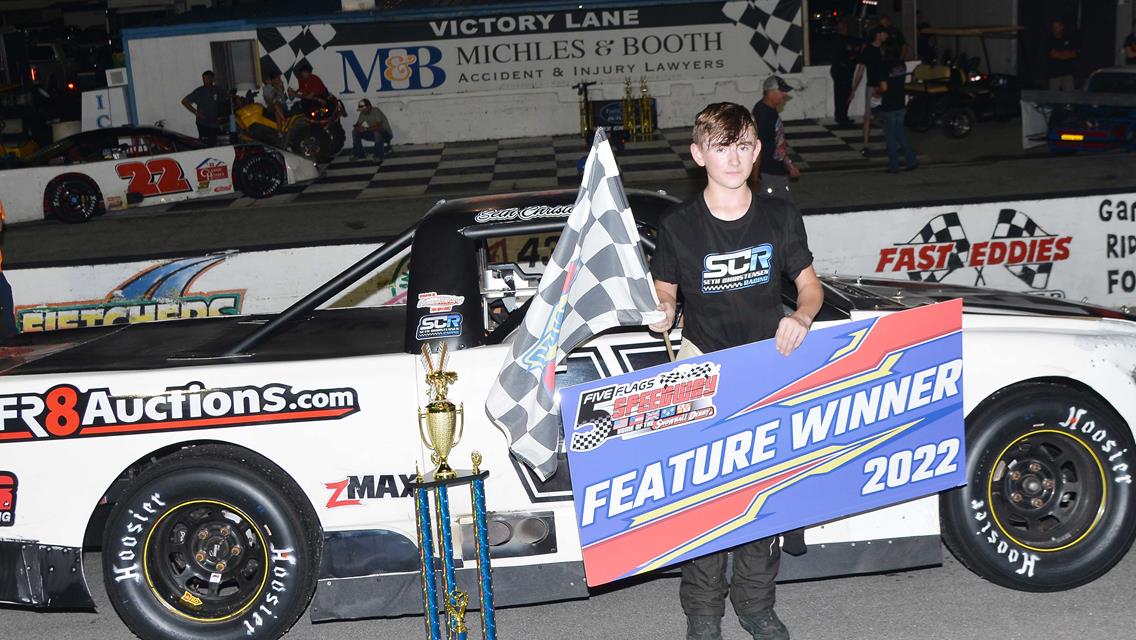 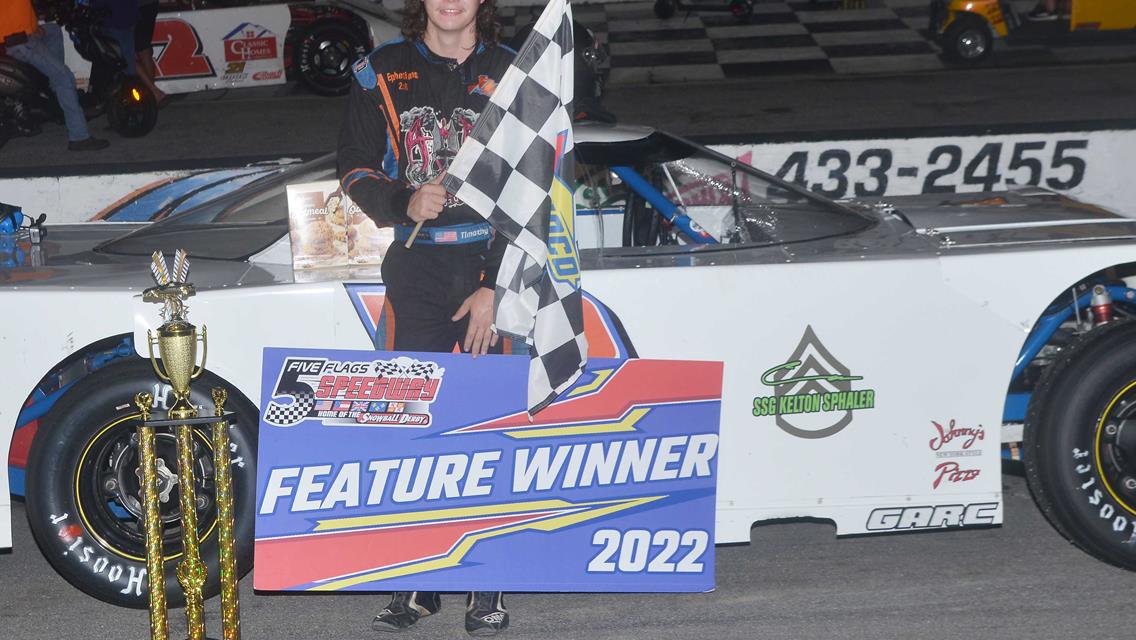