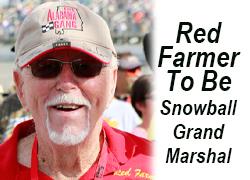 RED FARMER AT 90, TO BE HONORED AT SNOWBALL

By Chuck Corder
Five Flags Speedway reporter
Red Farmer—stock-car racing’s eternal flame—was officially named the Grand Marshal for the 55th Annual Snowball Derby presented by Hooters at Five Flags Speedway.
This year’s Derby festivities kick off Nov. 29 with the Racing America welcome party at the Hooters on Pensacola Beach. It culminates Dec. 4 for short-track’s most prestigious race, a 300-lap battle featuring the sport’s top Super Late Model drivers.
Farmer, the 90-year-old “Alabama Gang” member, has won more than 700 races in an active career that spans nearly 75 years. He still competes and won a heat race in September at his beloved Talladega Short Track.
In recent years, Farmer beat COVID twice, overcame double pneumonia and most recently recovered from two heart surgeries December 2021.
A 2021 NASCAR Hall of Fame inductee, Red once held the longest streak in Snowball Derby history with 32 consecutive starts. He was the polesitter for the inaugural race in 1968 with a best finish of second in 1987.
“It’s such a racing event now and I enjoy it,” Red said. “(Five Flags General Manager) Tim (Bryant) has done a helluva job with that place. I enjoy seeing second and third-generation racers competing. I’ve seen some grandkids of some of the old drivers I used to race against.”
One of Red’s biggest joys is visiting with the masses who seek him out wherever he goes. He is short-track racing’s Pope, a visit with the icon leaving you feeling blessed and giddy.
“I keep a Sharpie in my pocket,” Red said. “I never refuse a fan. Without those fans, making them happy, we wouldn’t get to do what we love. You have gotta keep the fans happy. If you don’t take care of the fans and make them want to come back to next week’s races, you’re outta business. That’s what I always tell young drivers. They want information on cars, but I also tell them, ‘Keep the great fans happy if you want this to be a long-term deal.’ ”