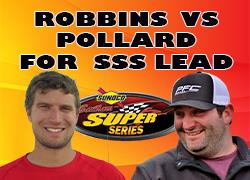 Bubba Pollard is in need of home cookin’.

After over a week away to race at the Battle at Berlin and Racetrack Revival at North Wilkesboro Speedway, the current Southern Super Series championship leader says his program needs some improvement and what better place to establish a baseline than Watermelon Capital Speedway.

Pollard opened the year by winning CRA Speedfest in January and continued the streak at his home track by winning the Southern Super Series Georgia Spring Nationals in March as well.

Pollard has made 22 starts this year and finished on the podium on seven of the first 11 starts. Over the past 11 starts, Pollard has finished of fifth or worse in eight of them. Again, it's a different standard when discussing Pollard and it's a standard he has set for himself.

"Cordele is a good race track for us," Pollard said after finishing second at North Wilkesboro on Saturday night. "It's a chance to re-baseline and start back over, I think. Regroup. We've been trying some different things to make our race car better and I don't know, driver made some bad decisions about what direction we needed to go."

Pollard has seven wins in 34 total starts at Watermelon Capital Speedway so Saturday night marks a chance to build some momentum before a stretch of races through the unknown that is the next month.

"It's a chance to regroup after this, because we're always trying to get better," Pollard said. "We also have Oxford coming up and that place is a crapshoot, has a mind of its own. We're going to Mobile too and no one has been there in a long time. So, this next month is a fresh start.

"We probably need to do some testing too, but we need a fresh start."

With that said, Pollard is also in position to win the Southern Super Series championship as he left Wilkesboro with a 10-point advantage over Hunter Robbins from Pensacola and the Ronnie Sanders Racing No. 18 team. Robbins hopes to take advantage over any emerging weakness from Pollard in that head-to-head battle with just two races remaining -- Cordele and Five Flags.

This will be the 12th time Robbins has raced at Cordele and he is still seeking that first win. But winning at Tri-County Speedway on June 25 was a big boost to their own program.

"We went through a bit of a slump this summer," Robbins said. "We were terrible at New Smyrna and Pensacola. We should have been good there and we weren’t."

Robbins finished second behind Sammy Smith but ahead of Pollard at Wilkesboro and is optimistic for the final two tour races and big race season this fall.

"Bubba is going to be really good at Cordele," Robbins said. "And we’re going to have to perform if we want to be series champion, and we are capable of that."

Outside of the championship favorites, the Southern Super Series roster will also have to contend with ARCA and Truck Series winner Corey Heim, who also boasts a pair of wins at the Georgia bullring.

Stephen Nasse also has a autumn Southern Super Series win at the track and remains in fringe championship contention at 45 points back.

The races will air live on Racing America.