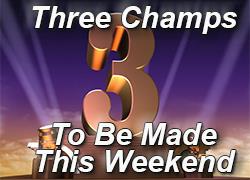 For the Super Late Models, Saturday marks the final points-paying event for both the Southern Super Series and Five Flags' Blizzard Series track championship. The Southern Super Series title fight features three drivers within 50 points of the top spot.
Hunter Robbins goes into Pensacola with the upper hand in that battle, leading Bubba Pollard by 19 points. Stephen Nasse sits in third, 41 points behind Robbins.
Those three drivers are also the top three in the Blizzard Series points, but with a different pecking order. Pollard holds a four-point advantage over Nasse and leads Robbins by 10 points for the Blizzard Series title. Matt Craig is fourth, just 15 points behind Pollard.

Robbins will also have a shot at the Allen Turner Pro Late Model championship. Robbins is tied with Dylan Fetcho for the points lead in that division, with Jake Garcia just eight points behind. Justin Bonnett and Chris Davidson are tied for fourth, 18 points behind the leaders.

For the Pro Late Models, however, there will be two races to determine the champion this weekend. They will race on both Friday and Saturday night at Five Flags Speedway, so there will be two opportunities for title hopefuls to score points.