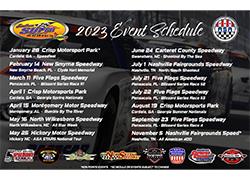 ASA Southern Super Series Releases 2023 Schedule
SSS…Where the Stars Are
(Pensacola, FL) Decade two, here we come.
The newly rebranded ASA Southern Super Series, presented by Sunoco, is set to begin its 11th Season in 2023, with the most diverse schedule in series history. Within the 10-year history, the Southern Super Series has been a platform for many to make their mark on racing history, whether it be as a stepping stone to different levels or simply as a home for an allegiance of fans to root on their favorite short track star.
For 2023, a new alliance with Track Enterprises, the parent company for CRA, and the ARCA Midwest Tour, will elevate the presence of the SSS on the National Short Track scene. Kicking things off will be a return to SpeedFest in Georgia on January 28. The event is a combined effort with CRA and a traditional non-points event that was won last year by short track star and former SSS Champion Bubba Pollard.
Next, the series will head south to New Smyrna Speedway on Valentine’s Day where, for the first time ever, the SSS will sanction the Clyde Hart Memorial in conjunction with the World Series of Asphalt Stock Car Racing.
March 11 will be race #3 and will present the inaugural ASA STARS National Tour event at Pensacola, Florida’s Five Flags Speedway. Return trips to Cordele on April 1 and to Stan Narrison’s Montgomery Motor Speedway on April 15 will set the tone for a busy month of May.
In May, the SSS will visit North Wilkesboro Speedway on Tuesday, May 16, as a lead-in to NASCAR All Star Week. On Thursday, May 25, the SSS stars will invade the historic Hickory Motor Speedway to kick off racing’s famous Memorial Day Weekend.
On June 24, a trip is set for the beautiful Carteret County Speedway in Swansboro, NC before heading to the Music City, as the North-South Challenge event moves to July 1 at Nashville Fairgrounds Speedway. Three weeks later, a big doubleheader weekend in Pensacola is set for July 21 and 22, with an August 19 date set for a return to Crisp Motorsports Park and the Georgia Summer Nationals.
The 2023 SSS Champion will be crowned on Saturday, September 23 at the Home of the Snowball Derby, Five Flags Speedway. And lastly, the SSS joins in, to finish it all off with the running of the All American 400 at Nashville Fairgrounds Speedway.
More exciting news will be coming soon, as the excitement level continues to build for what looks to be the greatest year ever for the Southern Super Series…where the stars are!
2023 ASA Southern Super Series Schedule
January 28 – Crisp Motorsports Park – Cordele, GA
February 14 – New Smyrna Speedway – New Smyrna Beach, FL
March 11 – Five Flags Speedway – Pensacola, FL
April 1 – Crisp Motorsports Park – Cordele, GA
April 15 – Montgomery Motor Speedway – Montgomery, AL
May 16 – North Wilkesboro Speedway – North Wilkesboro, NC
May 25 – Hickory Motor Speedway – Hickory, NC
June 24 – Carteret County Speedway – Swansboro, NC
July 1 – Nashville Fairgrounds Speedway – Nashville, TN
July 21 – Five Flags Speedway – Pensacola, FL
July 22 – Five Flags Speedway – Pensacola, FL
August 19 – Crisp Motorsports Park – Cordele, GA
September 23 – Five Flags Speedway – Pensacola, FL
November 5 – Nashville Fairgrounds Speedway – Nashville, TN